“Every Aerial Photo or Video taken from a drone that is used to promote a Real Estate listing MUST be taken by a ‘Licensed Commercial UAS Pilot’!”

own one themselves. They are showing up under family Christmas trees more every year and they take incredible photos and videos. It is hard to imagine not using these incredible aerial perspective images to reveal this usually breathtaking “Money Shot” of your listings as buyers do a double-take every time they see one.

Fortunately, for the do-it-yourself-er, Congress has flat-out told the FAA that they may NOT regulate to drone hobbyists their using drones for fun and personal use as long as those hobbyist have registered their Drones with the FAA and that the hobbyist operate in unregulated airspace and follow certain rules of the airways.
Unfortunately, the second you use an aerial photo or video to help sell your listing, even in unregulated airspace, you are no longer a hobbyist. You have just stepped into the role of a Licensed Commercial UAS Pilot.

M.R.E.C. – This “Commercial” activity is strictly prohibited by the FAA and the Missouri Real Estate Commission forbids Realtors from breaking any rule of the FAA and such action could land a Realtor on the Missouri Real Estate Commission Disciplinary Action’s page. Realtors may risk license suspension and/or fines by the Real Estate Commission for such activity. Realtor’s are also putting their Broker at risk legally. It’s just not worth risking your career. The FAA even uses an anonymous hotline for anyone who wants to report you. Even I get calls, but I am a Commercial UAS Pilot and my FAA License covers it. Always use a “Licensed Commercial Drone (UAS) Pilot, who has been approved and licensed by the FAA to perform the commercial activity. Questions? Contact Victor Today.

Caution when hiring a photographer – Many drone pilots have an FAA Registration like the white image to the right but that is not the same as the license shown below in blue. Registering a drone is actually a requirement that everyone including hobbyists must complete and is only a means for the FAA to determine ownership in case of a mishap or a drone is found involved in a crash. If the pilot does not carry “on 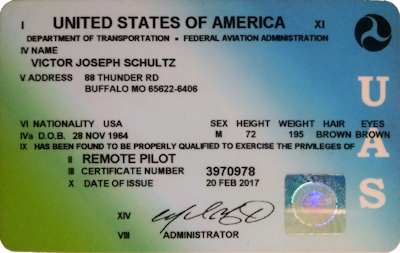 their person” a current license, then they may not work for you. It is 100% illegal.

An actual license looks like this and the Drone Pilot in Command (yes…that is an actual FAA term) must be present and carrying it on their person or you as a Realtor may find yourself in hot water.

In a notice interpreting the special rule governing model aircraft, the FAA explicitly stated that “a Realtor using a model aircraft to photograph a property that he/she is trying to sell and using the photos in the property’s real estate listing is not engaged in a hobby or recreation…..Realtors and other commercial drone operators are subject to all existing FAA regulations, as well as future rule-making action,” the FAA said.

The FAA has provided you a live interactive Map at http://knowbeforeyoufly.org/air-space-map/ that will tell you where you can and cannot fly as a Drone Hobbyist. The areas in Solid Orange and Orange Stripes are restricted or controlled airspace. Did you know that basically all of Springfield Missouri is off limits? The solid Orange circles are 10 miles wide with an airport in the middle and your drone may not legally leave the ground inside any of these circles. The orange dashed areas are usually Hospital Emergency Heliports. You are required by the FAA to stay out of all these areas. Do people fly their drones there? Yes, a lot. Should you as a Realtor risk it? As a Realtor adhering to the Realtor’s Code Of Ethics, you already know the answer to that question…No!

Licensed UAS Pilots go through extensive and rigorous training to understand airport flight patterns, weather, emergency procedures, etc. and can also communicate with Air Traffic Control (ATC) for obtaining clearance to operate inside these controlled areas. Basically we are “pilots” who fly a plane or drone from a ground station. Even certified and licensed pilots of “manned” aircraft can not enter these airspaces without clearance. Why would it be different for drones? Plus many other areas are restricted and need clearance or in some cases an FAA Waiver to enter those Restricted Areas. As a UAS pilot, we can alert you if your property is within a restricted airspace requiring basic tower clearance or a FAA Waiver. We can then obtain these Waivers as well as gain the Air Traffic Control clearance where Hobbyist will be denied access. 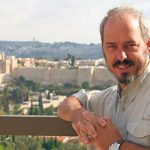